The Best Stand Mixers – How to avoid the wrong mixer

So, how do you avoid choosing the “wrong” mixer? First, you need to identify exactly what it is that you want out of a mixer.

Perhaps you’re considering upgrading your mixer or you’re starting from stratch. Either way, identify what it is that you want out of your mixer.

A few things to consider when choosing the best mixer:

So, what if you’re still not entirely sure? There are a lot of mixer options out there to choose from, so if we had to narrow it down to just three mixers that provide quality, a good variety of features and versatility, and value for the price, it would have to be the following three mixers: 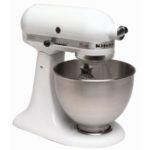 The price for this mixer is what a lot of people like. It can be found on Amazon (usually for under $200).

The K45SS has the accessories you’ll need to get started. However, I would suggest go with this model only if price is a big issue and you’re not going to be making lots of bread. At 250 Watts, it’s powerful, but not powerful enough sometimes, so you may find yourself wishing you would have bought the higher grade mixer for just a little bit more. 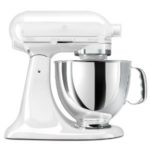 What makes this mixer great?

All the features? -Yes

But what really shows that this mixer shines? Look at the review count…over one-thousand seven-hundred reviews on Amazon alone and an average rating of 4.5 stars. That’s a lot of customer reviews! Check them out on Amazon

if your serious about this one. There’s also a video on the Amazon page where you can see it in a demonstration.

It is a little more pricey coming in just under $300 (sometimes there’s a post-purchase rebate to check out on the Amazon page as well).

The Artisan has good capacity with 5 Quarts, and is more powerful at 325 watts.

#1 Our Choice for Best Value in a Mixer Goes to… 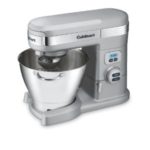 So what sets the Cuisinart apart from the Kitchenaid? They’re both great mixers. The Cuisinart has only just over 100 reviews on Amazon (still a 4.5 average rating). But it’s interesting to what everyone else is saying about it vs Kitchenaid:

The Cuisinart has power! It’s 800 watts compared to the 325 watts on the KitchenAid Artisan. Its price is right in line with the KitchenAid, so you really get more bang for your buck.

Obviously, we’re big fans of the Cuisinart, but you decide for yourself. Both the KitchenAid Artisan and the Cuisinart are fantastic mixers so you’ll be much better off with these than the lower end options.

So how do you avoid choosing the wrong mixer?

We posted an in depth review of the Cuisinart showing why it’s one of the Best Stand Mixers.