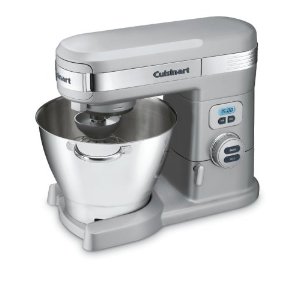 I have a stand mixer (which I will leave unnamed) that I received as a gift several years ago.

I’ve used it for all different things from cookie dough to pudding to bread, but I’ve never really been pleased with it.

With the constant raising and lowering of the bowl to add ingredients, detaching the mixing paddle in order to remove the bowl, and kneading dough by hand–I was sick of it!

I know, I’m complaining. But I knew there had to be something out there to fit my needs. So I went on a search and found the Cuisinart SM-55 5-1/2-Quart Stand Mixer.

It does everything I want it to do, so now I’m going to share my Cusinart Stand Mixer Review with you..

Why the Cuisinart Stand Mixer?

Tilt-Back Head
The Cuisinart mixer’s hinged top will save you time and hassle! It allows you to tilt back the whole top of the mixer.

This gives easy access to the bowl, so you can add ingredients without removing the mixing paddle and bowl (that used to be a hassle).

It also makes it easy to attach accessories. When you tilt it back, it locks the stand mixer into the raised position.

Splash Guard and Pour Spout
The Cuisinart Mixer has a splash guard with a pour spout to allow you to easily add ingredients to the mixing bowl once it is already on the stand.

Of course you can always tilt-back the top, but this is even easier and faster. No more odd maneuvering to add more flour. Good-bye splashes and spills!

Gentle Fold Function
You know when the recipe says “fold in egg whites” or “stir in chocolate chips?”

That’s what this function is for–delicate ingredients (such as egg whites) and last minute additions (nuts, fruit,chocolate chips).

It mixes at the lowest speed and has two mixing options: continuous blending or pulse to simply combine ingredients.

12 Mixing Speeds
The mixer has 12 speeds.

Now I don’t know what I would ever make to use all 12 mixing speeds, but better to have over-kill than under-kill.

With so many options, you’re bound to find the perfect speed to mix everything just right.

Why do I need a Timer and Auto Shut-off?

The Cuisinart mixer has a 15-Minute Countdown Timer with Auto Shutoff. Now here’s a function I had to research a little bit to find out why I even need it.

It’s great–you can set the Cuisinart mixer to time the blending or kneading of your mixture, then it automatically turns off when you’ve reached your desired mixing time.

This would be very helpful when kneading bread or rolls because while you’re busy doing something else, you let the mixer do the work for you, for just the right amount of time.

How Powerful is the Cuisinart Stand Mixer?

The Cuisinart SM 55 Stand Mixer has an 800-watt motor, compared to Kitchenaid’s 325-watt motor. It’s powerful enough to handle the heaviest mixing jobs and thickest doughs, but it’s not too noisy.

What other Attachments Work with the Cuisinart Stand Mixer?

Check out the Cuisinart SM-55 Stand Mixer product pictures on Amazon.com. The options are impressive! You can attach 5 different appliances (sold separately).

I like the idea of combining power bases and saving storage space in the kitchen. The attachments that fit the Cuisinart SM-55 model include:

The top cover hinges open revealing three power outlets where you plug in the different attachments:

How About the Size of the Mixing Bowl?

The Cuisinart mixer’s 5.5-Quart bowl is plenty big enough for doughs and double-batches. If you often make multiple loaves of bread, then you might consider a larger model, like the Cuisinart 7-Quart mixer.

The bowl also has handles so it’s easier to remove and hold.

The bowls and tools are top-rack dishwasher-safe, something I can’t say about my current mixer. Clean-up time just got easier!

What are Others Saying?

Cooks Illustrated did a review of mixers, and the winner, “Highly Recommended,” was the Cuisinart 5.5 Quart Stand Mixer. They go into detail about how it pushes through heavy tasks, has modern updates, an efficient dough hook, how its splash guard has a feed tube…
(source: http://ths.gardenweb.com/forums/load/appl/msg0815062018796.html)

But what means more to me are the consumer reviews. These are people who own and use it regularly. It has a ranking of 4.5 out of 5 stars from more than 160 reviewers.

“Definitely glad I chose Cuisinart over Kitchenaid.” — A lot of reviewers mention how they were hesitant to switch from a KitchenAid but how glad they are that they took the chance.

They also talk about the splash guard preventing flour or powdered sugar poofs all over their counters and floors.

Also, the ability to handle heavy loads without unbearable noise.

What’s in the Box?

Does it Have a Warranty?

The Cuisinart SM 55 5.5-Quart Stand Mixer has a 3-year product warranty and a 5-year motor warranty.

Where Can You Get the Best Price?

for $299 almost everywhere (including the Cuisinart website), but you can find it much cheaper on Amazon.com

Watch for rebates. Often they run specials where you can get the food processor attachment for free.

Even if you purchase it without the rebate, keep checking back at Amazon because they sometimes honor rebates even for recently purchased mixers.