How to make Gelato that tastes fantastic

Home » Good Eats » How to make Gelato that tastes fantastic

We recently tasted Gelato for the first time, and were hooked! It was soooo good. The next question on our minds was how can I make Gelato that tastes this good?

First off, what is Gelato, and what is the difference between Gelato and Ice Cream?

Gelato is like ice cream…but way better! It hails from Italy and is similar to ice cream, but there are some important differences:

Gelato will typically taste better when fresh (don’t worry, it doesn’t have to be eaten immediately after it’s ready. Give it several days, and it will still taste very good).

The best places that sell Gelati (that’s the plural for Gelato even though I find myself saying gelatos over and over…oops) will be Italian Gelato shops and some Italian restaurants.

Gelatos…er…Gelati, come from a land and time far far away says Wikipedia:

The history of gelato dates back to frozen desserts served in ancient Rome and Egypt made from ice and snow brought down from mountain tops and preserved below ground. More recently gelato appeared during banquets at the Medici court in Florence. In fact the Florentine cook Bernardo Buontalenti is said to have invented modern ice creams in 1565, as he presented his recipe and his innovative refrigerating techniques to Caterina de’ Medici. She in turn brought the novelty to France, where in 1686 the Sicilian fisherman Francesco Procopio dei Coltelli perfected the first ice cream machine. The popularity of gelato among larger shares of the population however only increased in the 1920’s-1930’s as in the northern Italian city of Varese, where the first mobile gelato cart was developed.

The Big Secret to making a terriric tasting Gelato is to use a Gelato Maker that the pros and semi-pros use.

So to make a knock-your-socks-off gelato, get a Gelato Maker. Period.

We’re assuming that you’ve already tasted Gelato, if not, go to an Italian gelato shop and try some (the imitation store bought stuff just won’t work). Trust me, you’ll want a Gelato maker to make it right.

Get a high quality Gelato Maker (if you love Gelato and want a better alternative to ice cream, it shouldn’t be a problem).

To really get down to the nitty-gritty details on what to look for and what to avoid when looking at Gelato Makers, check out our recent post: How to Select a Gelato Maker.

Then, I almost hate to say it, but for your first Gelati, follow the instructions in the recipe book that comes with your Gelato maker! We gotta learn the ropes first.

For starters, however, you can try the following:

You’ll want to thoroughly mix the sugar and milk until the sugar has fully dissolved then add the vanilla extract.

Now, it couldn’t be easier if you have a high quality gelato machine: put the ingredients you’ve mixed into the bowl of your gelato maker and close the lid.

Start your machine, and in 25-30 minutes, your gelato will be ready. Easy!

For added flavor and such: if you want to add berries, chocolate, or nuts, add after the mixer has gone for 20 minutes. Add your extras then, if you like, and mix for about 5 more minutes.

For a plethora of Gelato recipes check out Torrance Kopfer’s Making Artisan Gelato: 45 Recipes and Techniques for Crafting Flavor-Infused Gelato and Sorbet at Home

What’s awesome is that you don’t have to place the mix in the fridge before eating, because a quality Gelato Maker will self-refrigerate the mix for you while it does the work.

To really make quality gelato that your guests will be impressed with over and over again, look into a quality Gelato Maker.

It can make all the difference. 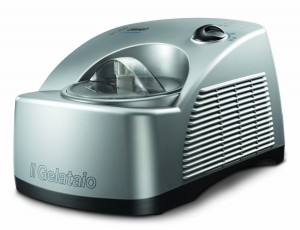 Check out our review of the Delonghi GM6000 Gelato Maker

For the truly adventurous, check out the industrial, Italian and high capacity: 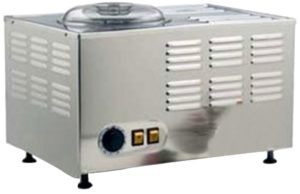