Does Your Slow Cooker or crock pot Have Lead in it?

I was in the market for a new slow-cooker, and while researching the best one to buy, I was shocked to learn that most slow cookers contain lead! What?! You mean we removed lead from paint, but we still allow it to leach into our food?

That’s not okay. After some digging, we came across the 360 Cookware Slow Cooker. It’s different than anything we’ve used before, and it’s awesome.

But, does it live up to all the hype?

First off, it doesn’t contain lead like other slow cookers, so it’s already winning there.

For those of you with small kitchens, this is a big deal!

Rather than the typical large frame, the 360 Slow Cooker has a heating element much like a hot plate that you set your 360 Cookware pot on. Since the pot is the same thickness of stainless steel all the way around, it traps the heat and moisture, circulating heat for even cooking. 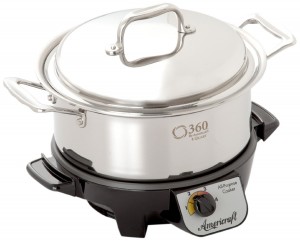 Vapor Cooking uses the natural moisture from foods to cook food, so you don’t have to add extra oils or water.

The 360 Cookware Slow Cooker uses vapor seal technology to trap in the moisture. All you have to do is spin the lid to create the vapor seal.

Since little to no water is used, nutrients are preserved, and your food will taste better and fresher.

The 360 Cookware pot isn’t made exclusively for the slow cooker.

You can use the same pot on the stove for steaming vegetables, making pasta or soup, even baking potatoes and cakes right on your stove top.

The 360 Cookware is a cross between a traditional slow cooker and regular pot for the stove.

That means fewer bulky items for you to store in your kitchen! I use the 360 Cookware pot regularly on the stove to make fresh tasting broccoli, peas, squash, or even soup. With that same pot, I can make a slow cooker meal using the hot plate heating element.

You know when your making a slow cooker meal and you have dirty up an extra pan to brown the meat or sautee the onions before adding them to your slow cooker? Not with the 360!

Brown or sautee in your 360 Cookware pot over the stove, then move that pot to the slow cooker heating element and add your other ingredients. It couldn’t be easier!

360 Cookware is made to use the same pot interchangeably with the stove, slow cooker, and oven.

360 Cookware is made in the USA using multiple layers of the highest quality (T-304) Stainless Steel and alloy construction.

The steel is manufactured using a sustainable process, plus the construction allows you to use less energy and water.

You Really Can Taste the Difference

Our kids actually want to eat their broccoli. The first night we cooked veggies in the 360, we ran out of veggies. Everyone at them.

You notice a difference in the taste. Food cooked in the 360 slow cooker tastes better.

It has to do with the materials used in the construction of the 360 as well as the specialized cooking method.

How do you Properly use Vapor Technology?

If you’re not familiar with the 360 cookware and what vapor technology is, it would be worth your time to watch this quick video so you can get a sense of what it’s all about.

What are People Saying About the 360 Cookware Slow Cooker?

“It says at the 360 Cookware site, ‘Simply put, 360 Cookware is unlike any cookware you’ve ever tried. It allows you to taste your food as it was meant to be…’ That may sound like exaggerated hype but it isn’t an exaggeration, it’s true.”

“Versatile: More than a slow cooker”

“Love this Gourmet Cooker. So handy, faster than a crock pot, and makes things so tender, no need to add much water to roast or steak. The vapor steam makes it tender and makes juice. It’s great!”

Is There a Warranty?

Yes. 360 Cookware is built to last, so they offer a lifetime warranty.

Where Can I Buy It?

The best place to buy the 360 Cookware Slow Cooker is Amazon. The price is just over $200, which is a great discount, plus you get free shipping. We love our 360 Slow Cooker, and hope you love your’s too.

Here’s where you can get it with free shipping and read more customer reviews on Amazon: