The excitement of having a G1 Android phone from T-mobile came crashing down when I pulled out my phone and saw that it wouldn’t turn on.  I thought that the battery must have run out but it was odd because I thought the battery had plenty of charge left in it.

I plugged in the phone and to my horror found that the LED light wouldn’t turn on.  Sick to my stomach I searched the net and found a few people suggested charging it a bit longer to see if the light comes on, others recommended removing the battery, and some recommended returning the phone.

I tried taking out the battery and was really concerned about breaking off the back piece since I really didn’t see how they took off the back at the store to insert the SIM card.

Just click on Guides > Battery Removal to view how to remove the back cover.  Yes, it’s simple, but you want to protect your phone don’t you?

I couldn’t remember if taking off the back voided the warranty, but hey, if you need to get your SIM card out, the back has to come off.  I took the back off and removed the battery, waited a few seconds and then replaced the battery.  Viola! It worked.

Could have been a simple fluke with the phone, a bad application maybe, or perhaps the phone got tossed around a bit (unlikely).

The night previous to this problem with the phone, I installed a number of apps from the marketplace:

I had also received the R33 update to the phone.  A combination?  A single culprit?  My guess is that it might have something to do with the R33 official system update or it could have been one of the apps that digs a little deeper into the phone control such as Power Manager or System Monitor.  If not a software issue, than it’s a battery or battery connection problem.  Either way, I’ll be watching close and will probably uninstall some of the unnecessary apps.

Still love the Android G1, although, I’m going to be even more cautious with it now.

Okay, I’ve had the G1 for almost 2 years now. I still love the phone, but the newer ones have definitely caught my eye.

I still wanted a phone with a keyboard however, and the others just didn’t quite look as good…until… 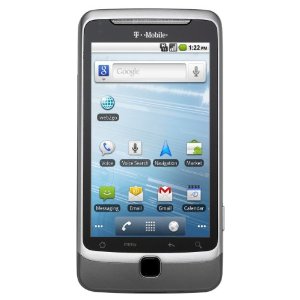 The New G2 on Amazon

…The G2 was announced.

The G2 is the followup phone to the G1 and it looks sweet. I’m waiting to get it when my contract renewal is due.

I didn’t know that you can buy phones right from Amazon.com. They describe what service providers go with the phones, but you can often find great deals online now for phones.

You can read the reviews and see the specs for it (or view other phones) with the link below on Amazon.com:

T-Mobile G2 with Google on Amazon

© 2021. All Rights Reserved. Disclosure of Material Connection: As an Amazon Associate we earn from qualifying purchases. Links on our site to other websites are “affiliate links.” This means if you click on the link and purchase an item, we may receive an affiliate commission. Regardless, we recommend products that we believe in and hope will benefit our visitors.