Fix for Nikon D60 Flash not Working (Video) – Don’t Send your Camera to Nikon without Reading!

We thought we were in for a major repair…the flash on our Nikon D60 stopped working.

The flash mechanism was accidentally hit with a stick by one of our nephews. Oops. Going in for too close a shot maybe?

The flash stopped working after that.

The flash made a clicking sound every time we tried to use it, but the flash wouldn’t fire.

After calling the local camera shop, they said it would probably cost $170 (we heard some people reporting $250) just to send the camera into Nikon to be fixed!

Oh, those prices were leftovers from the days before the Internet.

After a search on the Internet, we found a video tutorial (shown below) of how to fix this exact problem.

The issue was a small trigger in the flash mechanism came off the hinge it pulled back. Simply taking off the flash top cover and placing the trigger back on the hinge did the trick.

A few tips though, open the flash, turn off your camera, and take out the camera’s battery (you may get a little electric shock otherwise).

I used the Husky 8-in-1 Precision Screwdriver and found that the Phillips #000 worked best.

It took a while to find out how the precision screwdrivers were rated. With Phillips: 1 is big, 0 is smaller, 00 smaller, and 000 the smallest I found.

Here’s the video of how to fix a Nikon Flash when it’s not working:

Nikon D40 Flash Fix So thanks to Northern Lights for the video tutorial above!

So we fixed our Nikon’s embedded flash, and fortunately, haven’t had any problems since…except for one…

. We got bit by the bug and bought an external flash.

I love my Nikon DSLR, but when using the onboard flash, it creates harsh dark shadows behind people if they’re in front of a wall.

When you take pictures inside, there’s almost always something behind your subjects, and the dark shadows cast by the subjects onto the wall don’t look professional.

An attachable flash that can be angled up gets rid of this problem because instead of flashing the light directly at the subjects, the flash can be titled up bouncing the light off the ceiling and lighting all around.

After a little bit of research and searching, we’ve found a flash that we bought–yeah!

The external flash we got is the SB-400 made by Nikon. 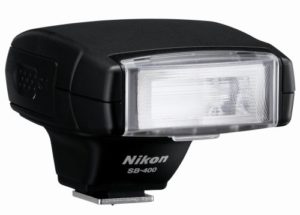 When I first saw the flash, it looked like the flash couldn’t tilt upward, but oh, yes, it can. Here’s a video from YouTube to prove it:

There are a couple examples on the Amazon page of pictures taken with the flash. One of them, I thought was a pro-picture uploaded as part of the product information, but it was actually uploaded by a person who had the flash and used it.

Just remember to slide the on button to give power to the flash. (I’ve forgotten a few times.)

You can read the reviews or buy the SB-400 Flash on Amazon.